How quickly life resumes.
After a wonderful four days in Walt Disney World, I am back at home and at work and the busy life of Doc resumes. But, it resumes with many new memories and many new friends.
As the weeks roll on I will share photos and memories of the trip, but for now I want share just one of the 1,382 photographs taken during this trip. This is of the rededication ceremony that took place in front of the Tree of Life this past Tuesday morning. 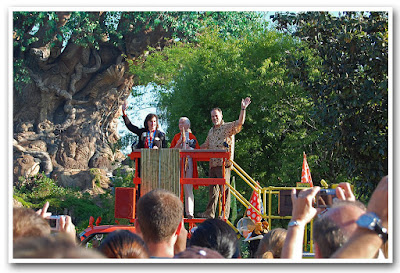 As many of you may recall, a few months ago I portrayed Judge Turpin in a local production of Sweeney Todd: The Demon Barber of Fleet Street. The role of Johanna, "my pretty little ward", was played by an incredibly gifted young lady named Nancy Hawthorne. During the production she and I became friends during which time I learned that she was from Florida. That must have come up shortly after I professed my obsession with Disney World (funny how that happens).

A few weeks ago we were talking and I mentioned that I would be visiting Disney World and would be attending the 10th Anniversary Celebration at Disney's Animal Kingdom. That is when I learned that Nancy was there for the Grand Opening in 1998. Not only was she there, but took park in the ceremonies as member of the cast. I invited Nancy to write about her experience and so here, in honor of DAK's 10th Anniversary, is Nancy's memory of Disney's Animal Kingdom Grand Opening Ceremony.

Performing in the Opening of Animal Kingdom: A memory of Nancy Hawthorne.

"It was during the spring of 1998 and I was in the 7th grade at Rochelle School of the Arts in Lakeland, FL. Rochelle provided the opportunity to focus on music as a middle school student and instead of feeling awkward and forming pecking orders, we created art together.

"'The first thing I remember about the whole experience was Mrs. Lambert, our choir director, coming out of her office saying, 'Yes!!!!!' We asked her what was so exciting and she said, 'I can't tell you yet... you'll find out later,'" Remembers my best friend Jaime Kight. We found out the next day in chorus; that we would be participating in the opening of Disney's Animal Kingdom and we were all unbelievably excited!

"Our choir spent the next few weeks practicing the songs to be the backup singers for the musical production for the opening day celebration. It included The Circle of Life from The Lion King. We sang the background vocals: “ingonyama bagithi baba” over and over again. One weekend, we came to school for a day rehearsal with other centralFlorida schools. A few Disney chorographers came to teach us the movement.

"The chorographers lined us up on all sides of the gym and split us into two parts. They gave us musical instruments called boom wackers, hallow plastic tubes that create pitch when you hit them on the floor and taught us our musical ostinati to play as we sung. In the weeks that followed, we rehearsed so much I remember my part to this day.

"We practiced for two days before the opening event. We ran staging over and over again, went through our part and watched how the professional singers and dancers worked their magic.

"The day of the opening we arrived at school super early, we rode a bus to backstage Disney. It was still dark when we got off the bus and went into a trailer set up for costuming. All of us wore black shoes, pants, and shirts. Disney provided us with African print tunics and matching hats.

"We walked out to the set. It consisted of a huge stage, 3 times the size of a performing arts center stage. The backdrop consisted of giant silhouettes of African animals: giraffes, lions, gorillas, etc. There were hundreds of high-school students there, we were the only middle school participating. I remember feeling SO COOL, incredibly excited, and of course a little nervous.

"Being young and short, I remember Jaime and I were on the front row of our section. At the beginning of the show, we ran up a set of stairs to make it on stage in time our first singing part. Jaime was the last one in the row and had to collect all the boom wackers and pass them off to the stage hands. It was an intense performance to make sure that you didn't mess up your part as well as intake the over stimulation of the professionaldancers and singers dressed in African garb complete with feathers and ankle shakers. In the audience were dancers on stilts painted like animals and the lead vocal character was from the Broadway cast of The Lion King. At the end of the show they even had doves and an eagle fly over head.

"We spent the few days prior to the opening rehearsing at Disney running staging and choreography, they spent a whole afternoon filming the performance. When Disney puts on a show, they pull out all the stops. It was an extraordinary experience to be a small part of such a momentous occasion!"

"When it was all finished my family had enough Disney tickets to go numerous times. Disney gave every performer 2 tickets for every Disney rehearsal/performance and donated money to the schools that participated. We continued to go back to perform for Candlelight Processional and seasonal events each semester, but nothing could compare to April 22, 1998 for the opening of Disney’s Animal Kingdom!"

Nancy, thank you for sharing your memories with us. This is a memory that many of us would love to have.

And for you regular readers of The Disney Obsession, remember Nancy's name. Some day you'll have the privilege of hearing her sing, and you'll agree with me, that she is an incredible vocal talent.

Next up from Doc will be my thoughts on DAK's 10th Anniversary and the "A Wild Decade" Celebration. Until then, "I am going to Disney World!"

This Time Next Week... 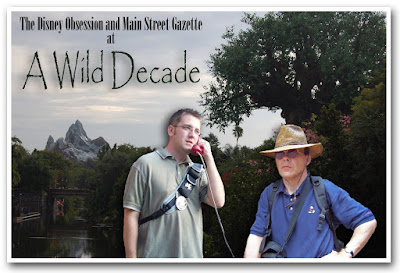 I love that expression! Especially when it pertains to things Disney. Especially when it pertains to being at Disney World. I will wake up in the morning and tell Mrs. Doc, "Honey, this time next week I will be riding Splash Mountain." Or how about this, "In just 72 hours (it is the same as "This Time Next Week", only more specific), I will be on a plane bound for Disney World." Which, in fact, I will.
However, staying with the theme of the post, "This time next week I will be at Disney's Animal Kingdoms 10th Anniversary Celebration." It isn't only me, it is several Disney fans who will come together for the A Wild Decade celebration. Just like MouseFest '07 was several of you, and will be for me this December, I am hoping to meet several others who share their passion for Disney through blogging, podcasting or both. One individual who will be there and who I'll be crossing paths with on a few occasions is Ryan from the Main Street Gazette. Ryan is regular reader of The Disney Obsession, as I am of the Main Street Gazette. He has a tremendous knowledge of the parks and other things Disney and I hope to learn from and be inspired by spending some time with him.
Also, for any of you readers who happen to find yourselves in Liberty Square on Sunday, stop by the Columbia Harbour House. Ryan and I will be joined by a few bloggers and podcasters of note (I'd say who but I haven't asked their permission to mention them here). We'll be meeting at 4:00 p.m. and to quote a nearby host, "There is always room for one more." Or two, or three, or four.
Then, stay on through Tuesday and help Disney's Animal Kingdom celebrate 10 years!
Just think, this time next week...
Posted by Greg 1 comment:

Place yourself in the picture. You have just enjoyed a wonderful dinner at Mama Melrose's Ristorante Italiano with your family. You began with Bruschetta to accompany your first glass of Merlot. The entree was Pork Marsala and you finished with a delicious Tiramisu. After all this you need to get outside and walk a little.
It is late in the evening and just up the street, you turn back, remembering the good meal and the good conversation. The street is empty and you have time to take it in. And then you see it. is that a grill in the upstairs window? 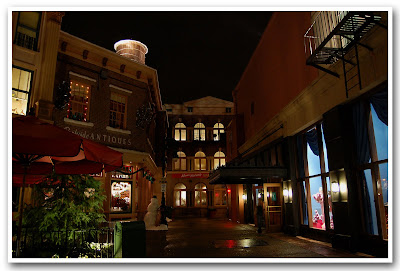 After taking a week away (frankly, a weekend out of town and a busy week at work forces you to take some time away), it is time to catch up with Where In The World. You'll remember a little photo of an ax on a wall. Well, we had some interesting suggestions on where in the world you'd find that particular ax. But this ax is found in Canada. Specifically it is mounted on a wall outside the Northwest Mercantile. Congratulations Ryan!
Now, for this week's edition of Where In The World! 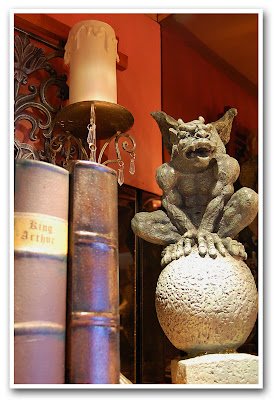 Email ThisBlogThis!Share to TwitterShare to FacebookShare to Pinterest
Labels: Epcot, Where In The World
Newer Posts Older Posts Home
Subscribe to: Posts (Atom)